A bold new wave of electrification

Manitoba has a history of being a world leader in progressive use of electricity, and the province could be at that forefront again by focusing on green energy such as solar.

When Neil Armstrong announced the 20 greatest engineering achievements of the 20th century at a National Academy of Engineering luncheon in February 2000, the list was impressive. It included the automobile, radio and television, water supply and distribution, agricultural mechanization, spacecraft and computers and the internet. Top of the list, however, was "electrification." It was deemed to have had the biggest impact on modern society through lighting, food production and processing, heating and air conditioning, refrigeration, communication, computing, health care and entertainment.

Electrification of households in North America began in the early 20th century and, along with rapid rural electrification in a span of 15 years (1935-1950), drove economic growth, productivity and vast improvements in quality of life. Transitioning away from kerosene as a lighting fuel and wood and coal as heating fuels improved indoor and outdoor air quality, enhanced respiratory health, drove economic activity through extending work hours and even enhanced education.

Although much of the western world might have forgotten this transition, electrification is currently taking place in many parts of the globe, where more than 1.3 billion people still lack access to electricity. At least a quarter of these people live in rural India, where kerosene is the only form of lighting.

Along with centralized infrastructure developments, such as extending the grid to more people, off-grid solutions are gaining momentum. An award-winning pilot program in the northern state of Uttar Pradesh is testing such a solution by bringing electric lighting and phone charging to 3,500 households through micro-grids powered by solar panels. One micro-grid uses a single rooftop panel and centralized batteries and services 30 homes (with four lights and a phone charger per home), at a total cost of US$1,000.

Villagers report they are able to save money on kerosene, work longer hours at home, prepare agricultural goods for market and their children can study later into the evening. By not having to walk to a central location for phone-charging services, they are able to access information more readily, transforming how they market their goods and use health care. Similar case studies can be found in parts of Africa, where 600 million people live without electricity, but substantial progress is being made.

The history of Winnipeg and Manitoba is rich with progressive movements around electrification. The first arc lamp was demonstrated in Winnipeg in 1887, four years before the first advertised record of such an event took place in another city. Street lighting and electric trolleys were adopted in Winnipeg much earlier than many other similar-sized cities in North America.

Rural electrification started in the early 1920s in Manitoba, and broad-based farm electrification in the 1940s greatly enhanced productivity and improved quality of life. By 1954, Manitoba was the most electrified province in Canada, driving innovation and progress in the power industry. The northern expansion of Manitoba Hydro in the 1960s, and subsequent growth, has made Manitoba one of the few places in the world that can boast of a near 100 per cent renewable grid and of being a clean-energy exporter.

The time has come for a second, deeper wave of electrification. Manitoba can yet again be a leader in this transformation, nationally and globally. As kerosene for lighting became a thing of the past, gasoline and diesel for transportation and natural gas for heating will have to follow suit. However, the barriers for transformation are not technological, but economic and social.

There are jurisdictions around the world demonstrating how the right regulatory and incentive structures can accelerate electrification. For example, even if electricity prices increase by 50 per cent in Manitoba, transportation using electricity (whether in an electric bus or car) would be five times cheaper per kilometre driven.

As return on investments (additional cost during purchase) now takes less than half the life span of the product, the ability to shoulder the upfront cost will be the main hurdle for a transit authority or individual family to electrify their transportation. Different levels of government can play a substantial role here by using revenue-neutral tools — such as eliminating sales taxes on products that transition away from fossil fuels by using carbon revenues — smart-loan programs that amortize the cost and benefits over the lifetime of the product and regulatory changes that drive product suppliers to reduce the upfront price and broaden product choice.

When thinking about home heating, ground-source (geothermal) and air-source heat pumps (backed up by traditional electric heating) are highly efficient, and if installed during the construction of the home, provide a clear economic benefit to the homeowner over the lifetime of the house. Combining this with advanced energy-saving building practices (better insulation, natural lighting, efficient windows, improved controls, passive heating and cooling, etc.) in a revised building code will drive electrification.

For existing homes, replacing an old water heater, stove, or furnace presents a clear opportunity to electrify heating. With the right incentives and loan structures, the choice should always lead to the use of homegrown green electricity over imported natural gas.

In February 2008, the NAE settled on a list of "Grand Challenges for Engineering" that would lead to marked improvements of quality of life in the 21st century. With inputs from thousands around the world and many subject experts, 14 grand challenges were announced. Making the list was lowering the cost of solar energy, demonstrating that the process of electrification is still ongoing.

Within the next decade, deep electrification can once again put Manitoba on the map and at the forefront of progress. 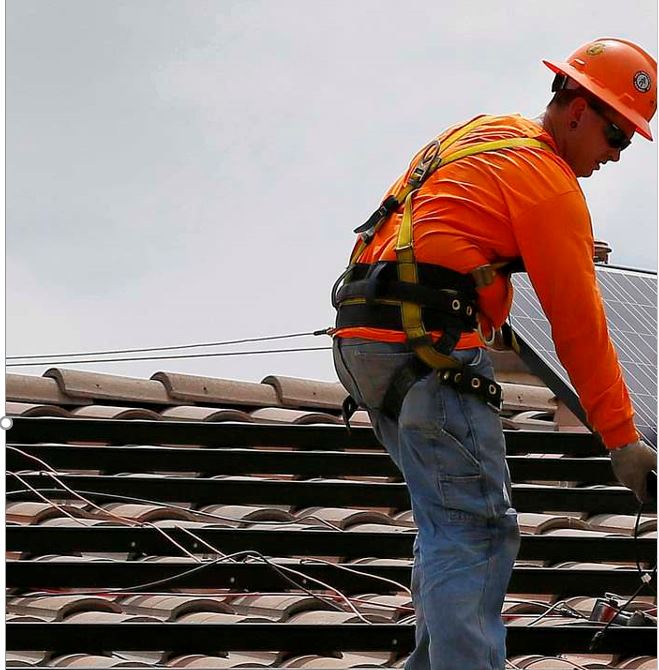